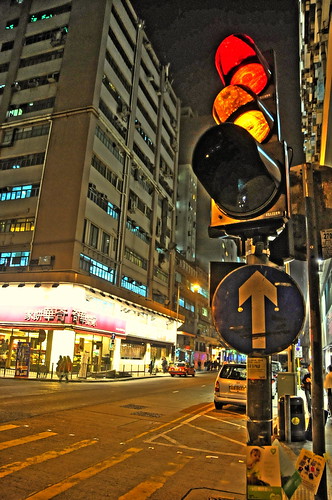 In 1920, in Detroit, Michigan, a police officer by the name of William Potts wanted a way to efficiently control the flow of traffic.  The number of automobiles on the road had increased, which meant that the number of automobile related accidents also increased.  He wanted a way to make the flow of traffic more tolerable to everyone.  What he had in mind was the idea of using the same theory that of a railroad signal lights.  He took parts from a railroad signal and added more wires and switch to create the first four-way three-color traffic light.  Pott’s traffic light was first installed at a corner of an intersection in Detroit.  Within a year more than a dozen of his traffics lights were installed throughout Detroit. With this four-way traffic light, it was made possible to control the flow of traffic in four directions.  His invention worked very well on managing traffic flow.  Meanwhile during the same time period an African American by the name of Garrett Morgan from Cleveland, Ohio, also noticed the traffic issues was on the rise since he is considered the first African American to own an automobile in Cleveland.  Morgan invented an electric automatic traffic light, very much like Pott’s traffic light except that it was not a four-way traffic light.  Unlike William Potts, Garrett Morgan patented his traffic light on November 12, 1923.  The modern day traffic light that we use today though is from William Pott’s prototype that he invented.